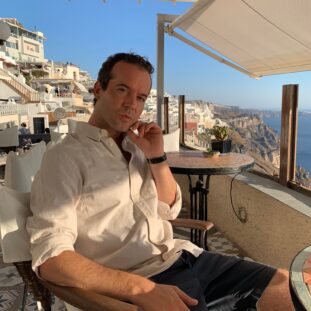 Panayiotis Terzis is an artist, printer and publisher based in New York City. Born in Greece and relocated to the United States at an early age, he is a citizen of both nations but knows that his earthly vessel belongs to the universe. His work has been published by Nieves, Fantagraphics, Landfill Editions, Vice Magazine, and others, and he has been exhibited widely across the US and globally including at the Elizabeth Foundation, Printed Matter Inc., the Swiss Institute, the Pera Museum (Istanbul), Andreas Melas Presents (Athens, Greece) and the Greek Consulate in New York. He has worked as an illustrator and textile designer with brands and labels such as American Apparel, Digitaria, Elsewhere Space, EyeBodega, McDonald’s, Lurid Records, and others. Terzis is also the founder of the Risograph publishing platform Mega Press. His artist books, zines and print editions are held in the permanent collection of the MoMA Library, the Brooklyn Museum, the New York Public Library and the collection of Stanford University among others. He teaches printmaking and Risograph printing at the School of Visual Arts and Parsons in New York City, and is a co-founder of the SVA RisoLAB.