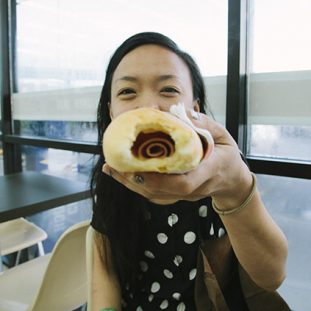 Thu Tran is an independent artist working mostly in collaboration with other artists, creating video, animation, installation art, videogames, and comics for various clients and institutions including the Museum of Moving Images, Super Deluxe, Hewlett-Packard, Google/Motorola and Case Western Reserve University. She was co-host of Barfcade game jam at Fantastic Arcade, where they also showcased games, Cleveland Games and Hellmouth. Cleveland Games was also featured at the Experimental Gameplay Workshop at GDC. She was the co-creator, co-writer, and host of television cooking series Food Party for IFC and Late Night Munchies for MTV. A long-time collaborator of Babycastles, she has helped produce videogame installations and workshops, including “Meowton: a Cat Town” at La Gaite Lyrique in Paris, “Cyborg Workshop” at WORM Rotterdam, and  “How to Babycastles” for MOMATeens. She has also guest lectured at Yale School of Sculpture, Maryland Institute College of Art, and University of New Hampshire.