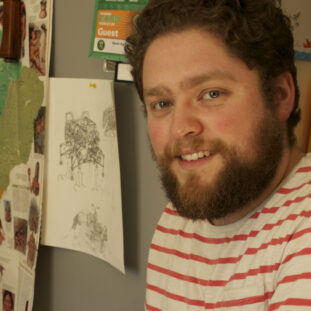 Simon Roy has been making comics in a mostly professional context since 2009, with the release of the sci-fi thriller Jan’s Atomic Heart. He was the premier artist and co-writer on the critically acclaimed relaunch of the comic series Prophet in 2012, and since then, has created and co-created such works as Tiger Lung (2014, Dark Horse Comics), Habitat (2016, Image Comics), First Knife (2020, Image Comics) and produced work for such comic properties as Star Trek Waypoint, 2000AD, Dark Horse Presents, Halo, and Robotech, as well as contributing to several comic book anthologies from the Vancouver based comics collective Cloudscape.

Outside of comics, Simon’s work has found its way into all sorts of places: like into Small Number, a math outreach program for First Nations youth, or Mikomosis and the Wetiko, an educational comic produced by the Indegenous Bar Association and the University of Victoria. His traces can even be found in tabletop role playing games, published through Chaosium, and in the computer game Six Ages. 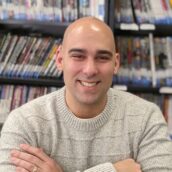