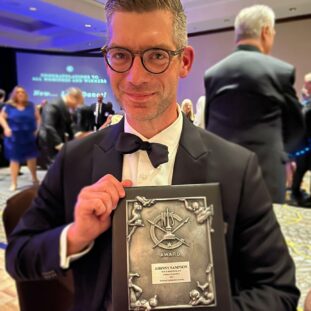 Johnny Sampson (b. 1974) is an award-winning cartoonist and illustrator living in Glen Ellyn, IL with his wife, two kids, and sweet little doggy, Coco. He received his BFA from the University of Illinois (Urbana-Champaign) in 1996 and did absolutely nothing with it. It’s a long story, but in a nutshell, he’s a late bloomer and realized he’s a cartoonist in his early 40’s. Anyway, he’s been freelancing since 2006 and has worked with all kinds of clients. He’s done storyboards for movies (none worth mentioning here) and advertising (in the pre-2008 crash bonanza– boy, those were the days!). He’s worked with the likes of Action Bronson, The King Khan and BBQ Show, “Weird Al” Yankovic, The Black Keys, and Comedy Bang Bang. His work has been published by Abrams, Chronicle, New York Times, The Stranger, and by his own damn self. With Al Jaffee’s blessing, he has been doing the Fold-In for MAD Magazine since 2020 (yes, it is still in print). He is a proud member of the National Cartoonists Society and currently the Chair of the Chicago-Midwest Chapter. In his spare time, he can often be found at the local skatepark working on his frontside grinds.