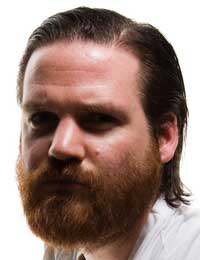 Benjamin Marra is the creator, writer, and artist of the comics NIGHT BUSINESS, AMERICAN BLOOD, and TERROR ASSAULTER: O.M.W.O.T. (One Man War On Terror), all published by Fantagraphics. Acclaimed writer Grant Morrison chose Marra as a collaborator for a story in the first issue of the relaunched HEAVY METAL Magazine. Marra had two serialized webcomic series appear on adultswim.com, HIGH SCHOOL HOOOKER//VIGILANTE WITCH PRIESTESS and BRICKS ON DIRT. His most recent book is JESUSFREAK, written by Joe Casey and published by Image Comics. In 2016, he illustrated the cover of American Illustration 35. In 2017, he was nominated for a Grammy Award for his album art of Wayfaring Strangers: Acid Nightmare, a collection of obscure 1970s Heavy Metal. In the summer of 2019, Marra created a comic for J. Cole and his Dreamville labelmates in conjunction with the release of their album, REVENGE.