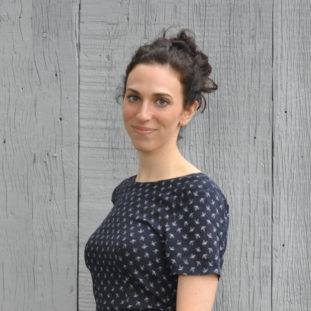 Jenny Goldstick is a Brooklyn-based artist, narrative and infographics designer, and educator interested in the hows, whens and whys of non-linear storytelling. She has exhibited at Babycastles, at the Wordplay interactive fiction festival in Toronto, and was an official nominee at IndieCade independent games festival in 2016. She has collaborated across disciplines with creators such as multimedia artist Richard McGuire, comics scholar Bill Kartalopolous, and author Matthew Gavin Frank. She is co-creator and executive producer of Story Of/ workshop, an interdisciplinary hackathon-style event that prioritizes visual story concept over technique and media for a weekend-long prototyping session. She consults with and creates graphics for a wide range of clients, including science textbook publishers, Major League Baseball, Environmental Defense Fund, and the Office of the NYC Mayor. She most recently contributed narrative design to the upcoming Oregon Trail Choose-Your-Own-Adventure Picture Book, to be published by Houghton Mifflin Harcourt in 2020.

She holds a BFA in Communication Design from the Sam Fox School of Design & Visual Arts at Washington University in St. Louis, and an MFA in Visual Narrative from School of Visual Arts.